Expanded perlite is recommended as a carrier for pesticides, feed concentrates, herbicides, and other similar applications.

As a carrier for feed concentrates, perlite will readily adsorb the concentrate while remaining free flowing (anti caking) and chemically resistant to microbiological degradation. The perlite also permits quick liquid movement between the carrier surface and the recipient of the feed concentrate.

In the Food Chemicals Codex, expanded perlite is approved for use as a filter aid or pressing aid in the processing of foods and feed ingredients, and also as an anti-caking agent.

In the U.S., this application has been approved by the Association of American Feed Control Officials (AAFCO).

In the EU perlite is approved and entered in the Register of Feed Additives pursuant to Regulation (EC) No 1831/2003. 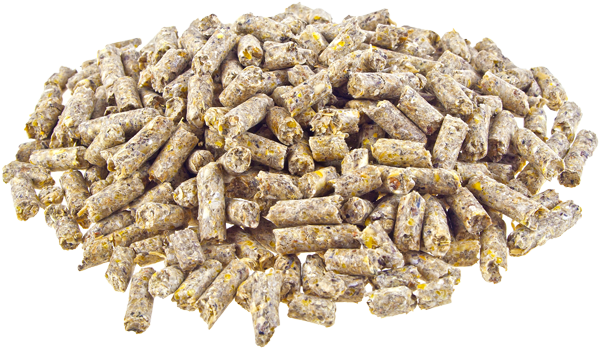 In a U.S. patent in 1982 (4,310,552), entitled “Casting Perlite before the Swine”, perlite was used in combination with swine, hog and pig fodder (usually made from digestible meal or grain components). The combined mix of 10-50% perlite allowed the perlite to be used to “store in its open-pore structure physiologically or medicinally effective substances such as medicaments, and trace elements essential to nutrition and vitamins.” The objects of the patent were listed as: improvements in feed fodder, improvements in methods of feeding pigs, and improvements in the eventual disposal of pig excrement.

In the early 1980’s, Dr. P. Glodek of the University of Gottingen in Germany experimented on the use of perlite in pig feed. A comparison was made between pigs fattened with traditional feeds and those fattened with the same feeds combined with perlite.

According to his report, “the two perlite groups showed still significantly higher daily intakes of feed and weight gains than the ad libitum control group, which in turn clearly did better than the ration-fed control group.” “It must be especially emphasized that the perlite fed pigs achieved a daily weight gain higher by 197g and a duration of fattening lower by 23 days with the same feed utilization as the ration-fed control animals….”

“It can therefore be concluded that in this experiment, the perlite feed made possible a faster fattening with the ad libitum feeding than is possible with conventional ad libitum feeding without significant disadvantages in feed utilization as compared to customary rationed feeding.”

Hassan Talebali and Amjad Farzinpour of Department of Animal Science, College of Agriculture, Kurdistan University of Iran evaluated the “Different Levels of Perlite on Performance of Broiler Chicks” (2006).

Average feed intake, weight gain were measured in the end of each week of experiment and mortality was measured throughout the trial.

The results show that adding perlites to the diets of broilers from one to forty two days of age, produced significant differences (P<0.05) in terms of live weight gain and feed conversion ratio (FCR). Based on these results numerically, group B (fed 1% perlite) and group A (fed 0% perlite) had the highest (1624g) and the lowest (1397g) weight gain in whole period of study respectively. Statistical differences indicated non-significant differences in feed consumption and mortality between all experimental groups (P>0.05).

Khodanazary, Boldaji, Tatar, and Dastar, writing in the Turkish Journal of Fisheries and Aquatic Sciences 13: 495-501 (2013) identified the Effects of Dietary Zeolite and Perlite Supplementations on Growth and Nutrient Utilization Performance, and Some Serum Variables in Common Carp, (Cyprinus carpio)

Five experimental diets tested were a control diet, and zeolite and perlite additions at levels 2.5 and 5%. Each treatment was tested in three replicates tanks using fish with an initial average weight of 30±0.5 g. Fish were hand-fed, twice a day for eight weeks. The results showed that the dietary perlite and zeolite had no influence on the fish condition factor (P>0.05). There were improving effects of the dietary additions, particularly at 5%, on growth performance of fish compared to the control. In conclusion, the results of this study suggest that dietary supplement of zeolite and perlite can be used as a new aqua-feed ingredient for common carp.

We would love to hear from you

Click below to get in touch with our friendly and experienced team.